I will openly admit it, I hold my hands up, this is not the ‘cleanest’ of my recipes.  And it is neither wheat nor dairy free. Sorry. But it is unprocessed, organic and tastes AMAZING!!! It is also super easy suser easy to make and is loads healthier than your average burritos or lasagne, which is why I’m going out on an intolerant limb and including it.

A few months ago my daughter innocently commented that “we always have the same things to eat” and I realised with horror that she was right! Since her younger, pickier brother came on the scene, I have experimented less and less as each attempt was met with failure. And whilst I try different things for me and the husband, or we might give a new recipe a go at weekends, I do tend to churn the same things out for the kids on weekdays. Well, no longer! I hit the supermarket with a vengeance! Some time later, after traipsing round trying to ignore small boys screams for chocolate/magazines/ anything, I trundled out with some mild Moroccan spice (see Tantrums and Tagines) which was a total waste, and some corn taco shells. Which were a hit! As they are essentially Doritos/crisps I was right to assume small boy would woof them down like a rabid dog. Brilliant.

Tacos are not the healthiest thing on the planet, but they are gluten free (hurrah!) and a welcome variation from the rice/pasta/potatoes conveyor belt as they contain corn.  I like to ‘rotate’ the kids grains where I can to try to prevent them from becoming intolerant, to get as many different nutrients in them as possible, and just for a bit of interest and flavour.  Taco filling leftovers are also fab with  wraps to make enchiladas or burritos, or just with some rice, so you have several different meals from one creation. RESULT!

Burritos in particular were such a hit that I played around with them and created this little beauty of a recipe. Once you try this you will never make lasagne again.  It takes less than half an hour to make this. Seriously, bit of chopping, 20 minutes total cooking… BOOM! Kids tea. DONE! 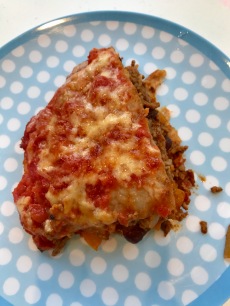 3 large tortilla wraps (I use these Crosta Mollica Organic Flatbread they literally contain wheat, oil, salt, unlike most other wraps which contain a million ingredients)

1. Fry onion in olive oil for a few minutes, turn heat up and fry mince until browned. Then add spices, herbs, garlic and chopped pepper and fry for another 2-3 minutes. Add kidney beans and 100ml water, cover and simmer for 5-10 minutes.  The mixture should be fairly dry, you don’t want the wraps to go too soggy. Simmer with the lid off for a few more minutes if there is too much liquid.

2. Lightly oil an oven dish that will hold your wrap without it overlapping the edges or coming up at the sides. Or, cut your wraps to fit the dish you have. Lay your first wrap down and top with half the meat mixture, making sure it goes all the way to the edge of the wrap to keep everything moist. Add the next wrap and repeat with rest of meat. Top with final wrap.

3. Mash chopped tomatoes roughly with a fork to create a smoother texture. Spoon over top wrap, again making sure everything is well covered so it doesn’t dry out. Season with a little extra oregano, salt and pepper. Top with grated cheese. Bake in oven (180C) for 10 minutes or so until cheese is all bubbly and golden.

Serve with sour cream and/or guacamole if your kids will eat them. FYI mine won’t.